Horror on the Orient Express is at last pulling into its final destination. The first copies have arrived in backers’ houses generally with a resounding ker-thump, and a twinge of sore backs. You are warned, folks, the Thing on the Doorstep is actually a brick.

It was a two year journey, and far longer and stranger than any of us planned. To stretch the analogy, possibly to breaking point, we have dug the train out of snow-drifts, left friends stranded at out of the way stations, and scattered a trail of lost toothbrushes, odd socks and broken suitcases in far and foreign lands. However all these travails are forgotten as at last we hold the Brick  in our hands (and always remember, folks,  when picking it up keep your back straight and bend at the knees). 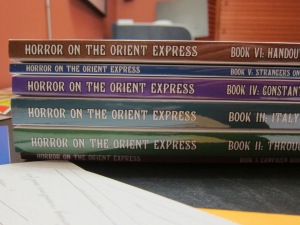 Stack of books – from Games from the Front blog

We already have a photo blog of the formal Unwrapping of the Campaign Box by Ty Snouffer from the Games from the Front blog, and a nice review on The Escapist by Adam Gauntlett (“Where the reprint expands on the original scenarios, it’s almost always for the better.”)

The short story collection Madness on the Orient Express, overseen by the all-seeing editorial eye of James Lowder, will be out by the end of the year. The PDF is already available. Two of the original Horror on the Orient Express crew, myself and the erudite Geoff Gillan, have stories included in the anthology, along with a host of luminaries. It has an evocative cover, perfectly capturing that moment when one must confront the tentacled monstrosities that have taken over the dining car.

Like the people on the train above, this is our stop. But as our Kickstarted journey is ending, someone else’s is beginning: Bret Kramer of the splendid WordPress blog Tomes in Progress is crowdfunding the Third Issue of The Arkham Gazette, a magazine all about Lovecraft Country. If your investigators refuse to set foot on the Continent again after Orient Express, Bret will give them plenty of things to fear back home in the Americas.

Don’t be a stranger on the train. You’ll find Mark over at Campaign Coins. He also has his personal Twitter feed, more to do with our writing projects. If you want to haunt us, start there.

One more round of thanks before we go, first and foremost to the much lamented, redoubtable Lynn Willis, the original editor and visionary.  To Charlie Krank and Meghan McLean and Nick Nacario and Mike Mason and everyone at Chaosium who kept the dream alive, and took the reprint to heights we would never have dared dream. All the other writers, those who came back, those who joined us, and those who wished us well: Bernard, Carl, Christian, Darren, David, Geoff, Hans-Christian, Marion, Matthew, Michael, Mike, Nick, Oscar, Paul, Paul, Phil, Richard & Russell.

Most of all, we thank all you lovely Kickstarter backers, who kept faith in this ambitious project. Georges Nagelmackers could not have dug the Simplon Tunnel without help from his backers and without you this mighty tome would be but an unsavory gleam in a cephalopod eye. Together we have arrived at our destination, and now, alas, we part. This is our last stop on the journey of this blog. Our last post. Our last words, our last hurrah, and our last point of Sanity.

Good bye all, and thank you. It has been one hell of a ride. 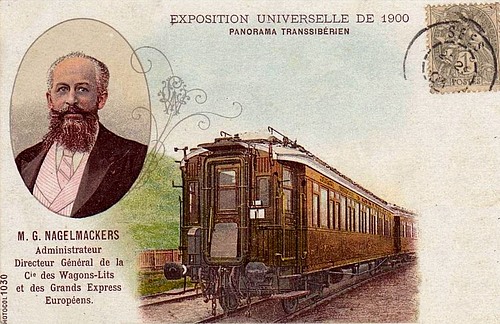 Georges Nagelmackers, and his train, depart